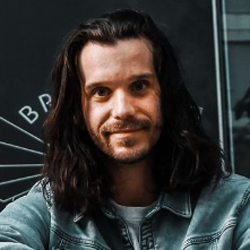 Eric McKinnon ‘06 remembers his shyness as one of Greenwood’s first-ever Grade 9 students. “I was a very individual person,” says Eric, who eventually opened up as his school friends and Greenwood staff introduced him to new perspectives and encouraged him to explore new horizons. When it came time to decide where he would go for postsecondary studies, he remembers his best friend’s dad urging him to “go out west where the mountains are.” Eric took a chance and got into the program despite his reservations.
Venturing out west, Eric attended the joint UBC and Emily Carr University Fine Art program. “I went there kind of unsure what I wanted to do, but through Greenwood, I was really exposed to art and music,” he says of his decision to pursue fine art, art history and curation in university. His experiences in his university classes opened his eyes to the fact that beyond the art itself, there is a lot required to keep the art world running, such as galleries and managers. The seedlings of his vision for a gallery space started to take hold in his mind.
After graduating, Eric spent a year in Venice, Italy, as an intern at the Peggy Guggenheim Museum. Eric’s work ethic and retail skills impressed one of the museum’s higher ups, who encouraged him to continue working in New York at the Solomon Guggenheim Museum. In New York, Eric’s role in the museum’s day-to-day visitor services and special events department allowed him to work with every other department. His time at both Guggenheim museums gave him a good idea of how he would want to run his own gallery.
Eric got an offer to remain with the Guggenheim, but he decided to take a break and travel while he pondered his next steps. Once he returned to Toronto, he set out to break into the city’s gallery scene. However, he soon found that much of that scene is passed down through families, which made it difficult for him to get a footing. Fed up, Eric took a big portion of his savings, created a business plan and opened up Broken Cage Gallery.

His goal was to break down barriers with his gallery. “A lot of people, especially the younger demographic, won’t even go into a gallery or museum because it’s an intimidating process,” says Eric. Part of his gallery’s mandate is to create a more relaxed and inviting atmosphere. The gallery regularly hosts music nights, movie nights and comedy shows. “The world needs more laughter, especially now,” says Eric. Broken Cage Gallery has also hosted external events with the likes of the Toronto Raptors and Drake’s OVO team.
Just a few months after the gallery’s opening, the COVID-19 pandemic brought all activity to a screeching halt. Luckily, Eric was able to work a retail job at Northline Sports to keep the gallery afloat while he eagerly awaited news about reopening. “I’m on a first-name basis with a lot of people from the health department,” laughs Eric. His perseverance paid off, and the gallery is thriving with the relaxed restrictions. He continues to work seven days a week, splitting his time between managing the gallery with his partner and working at Northline Sports.
Eric urges students to push through their comfort zones and try new things. “You may hate it, but you won’t know until you try it at least once,” Eric says. “And you may end up regretting that you didn’t try.”
Back