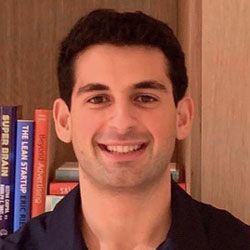 Adam Aber wasn’t sure what he wanted to study in his first year at McGill University, but he knew he wanted to pursue a subject that pushed his creativity and broadened his horizons. “McGill has a really cool exchange program, and I loved the prospect of learning more about other places and cultures,” Adam says. “Once I realized that, I fell naturally into International Development.” In keeping with this academic focus, Adam also joined the Doctors Without Borders Club at McGill, running regular fundraisers for the organization’s operations.
After graduation, graduate school was in the back of Adam’s mind; however, “I felt I needed to do something to figure out what I wanted before rushing into more schooling,” Adam says. He learned of a sales role at Yelp through a fellow Greenwood grad and decided to pursue it. “I’m a big food person and a big people person, and I’ve always been curious about restaurants, so I think it was a good fit,” he says. This first work experience out of university was a positive one for Adam, including lots of travel and opportunities to get to know new places. 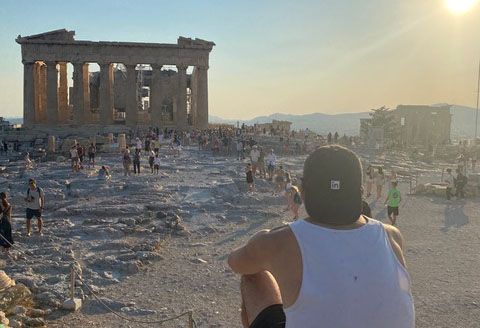 Adam enjoys the view of the Parthenon in Greece.

Like for so many of us, the pandemic and the changes it brought shifted Adam’s path. With restaurants taking an unprecedented hit at the time, Adam pivoted and pursued his goal of additional schooling. He contacted the Munk School of Global Affairs at the University of Toronto, where he had long considered studying. “It was way past the application deadline, but I wrote them a letter asking them to open another spot,” Adam says. They agreed, his application was accepted, and he prepared to start the Master of Global Affairs in September of 2020. 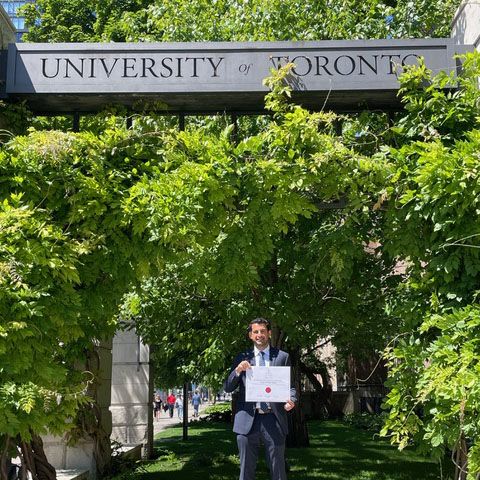 Adam celebrates his graduation from UofT.
Before starting the program, he and his sister, Rachel Aber ‘16, also did their part to help those affected by the pandemic. They volunteered with Global Medic, packing up food kits for distribution to outreach communities and emergency response teams abroad.
Adam’s master’s program included a four-month internship with the UN Refugee Agency (UNHCR), which he continued into the summer. “I got to learn more about world issues like the situation in Afghanistan when the United States pulled out, and lesser-publicized crises like the Tigray War in Ethiopia,” Adam says. He is now a digital consultant for UNHCR, and he thinks he may want to continue down this multilateral path; he is also interested in a second, more grassroots path in government affairs. “I’m interested in understanding how large-scale development projects are completed in Ontario and Canada,” Adam says.
Adam has recently joined the Ontario Ministry of Labour as an Executive Assistant. He plans to work on policy and communications for the Minister’s Office. Adam hopes that learning more about government operations and “how it works” may open additional opportunities down the road.
Adam feels that Greenwood’s learning environment fostered a love of learning that he carries with him today. “I’m still very curious, and I like to learn whenever I can,” Adam says. “Having support from teachers who cared a lot made me more willing to put in the extra effort myself to be committed to lifelong learning.”
Greenwood’s tight-knit environment has also stayed with Adam in the years since graduation. “The feeling and sense of community you get at Greenwood is unrivalled,” he says. “Being encouraged, as a new Grade 7 or Grade 9 student, to meet and work with students in all other grades creates this amazing feeling of interconnectedness.”
Back