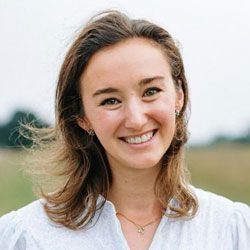 Lexie Von Hahn ‘11 first started at Greenwood in Grade 9. She spent most of her childhood abroad in Chile, Argentina and Mexico before her family settled down in Toronto. “[Greenwood] was the perfect way to kickstart a new life here in Toronto after moving around so much,” says Lexie. “Part of what made Greenwood so special to me is the fact that everyone was embraced the way that they were.”
Lexie recounts how Greenwood exposed her to many new experiences that helped her explore beyond her comfort zone. A shy individual, the student ambassador role helped her to develop her confidence as it pushed her to interact with many people across countless tours. Lexie felt supported by Greenwood staff to pursue her interests. Whether it was figuring out canoeing at an OE trip or trying out for an athletic team she didn’t have much experience in, Lexie was encouraged to try new things.
This confidence and comfort with discomfort helped Lexie on her path beyond Greenwood. After graduation, Lexie went on to study in Scotland at the University of St. Andrews. “It was four years of living in a fairytale world,” she says of the picturesque Scottish landscape and towns. “I always knew I’d end up in Toronto so I wanted to go somewhere a little different and try something fun.” Lexie took advantage of Scotland’s proximity to the rest of Europe to take plenty of excursions. She fondly recalls a road trip she took with another Greenwood alumna to France and Italy.
She was first enrolled in International Relations and Management at St. Andrews, with Art History as an elective. After she spent a summer working at the Mexican consulate in Toronto, she realized that she was far less interested in International Relations than she thought. Lexie found her Art History elective much more fascinating and thus made the choice to switch majors to Art History and Management instead. Studying art history while in Europe was an incredible boon for Lexie. “I was also fortunate that living in Europe, I could hop over and see a lot of the pieces we were studying in our history classes,” she says. 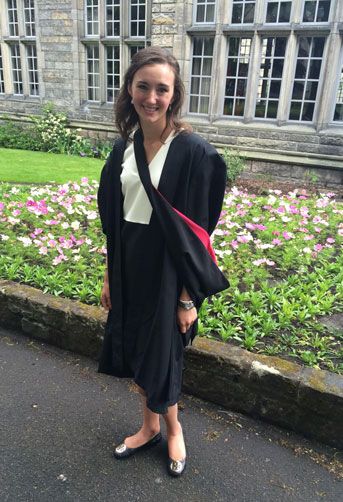 Lexie poses at her graduation from St. Andrews.

Lexie still had two years remaining on her student visa after graduating from St. Andrews, so she decided to study law in London to give herself a more well-rounded education. “I hoped that studying law would help make my application stand out when I applied for jobs,” Lexie says.
With her undergrad and law degrees in tow, Lexie moved back to Toronto.
She worked at a tech start-up before she took on an analyst role for The Group Ventures, a venture capital firm specializing in tech companies. Lexie’s role mostly involves her getting to know the companies as part of the firm’s due diligence process before investing in the tech company. Her prior role at a tech start-up gave her some insight into the pain points these companies are tackling and their challenges as fledgling businesses.
Lexie also felt a desire to explore her creative side. When the pandemic lockdowns left her with more time on her hands, she started brainstorming a fashion brand with her sister, Katrina (who is also a Greenwood alum). They named it Gallola, and the fashion pieces would be largely inspired by the sisters’ upbringing in Latin America. “I had the benefit of working at a start-up and also with a small team at a VC so I’m very used to wearing lots of hats!” laughs Lexie. “There’s definitely no playbook on how to start a business and find manufacturers during a global pandemic.” You can find Gallola on social media @gallola or at www.gallola.com. 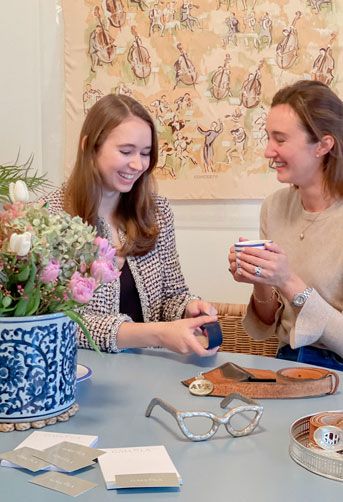 Lexie (right) works with her sister, Katrina (left) to create designs for Gallola.

While she may be treading into uncharted territory, Lexie relishes the new adventure. Greenwood taught Lexie how to persevere and “figure things out”. “I may not have taken the most direct route for anything I’ve done, but I think the winding road is a little bit more exciting and leads to more interesting experiences,” Lexie muses. “My advice to Greenwood students is to soak up as much of what Greenwood has to offer as you can, even if you can’t see a conventional path ahead – because eventually, it may come into play in your future.” 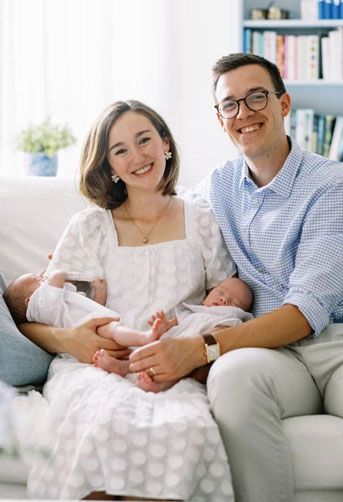 Lexie looks forward to charting the next part of her journey with her partner and twin boys.
Back